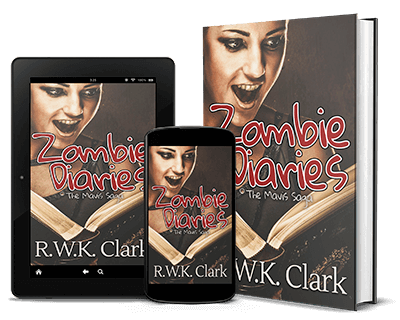 This is the story of Mavis Harvey and her struggle to figure out who is her date, and who goes on a plate. While most high school juniors are worried about acne, grades, and dating, Mavis has a host of issues to deal with, like her appetite for human flesh.

Mavis is a young woman struggling to keep her zombie nature under control. In Zombie Diaries by R WK Clark she is terrified of letting anyone know about her condition for fear that they will reject her. However, she has a friend and begins to open up about her struggles. Together, they set out to find a cure for Mavis’s condition. Along the way, they face many challenges and obstacles, often with gruesome and hilarious results. Zombie Diaries by R WK Clark is a modern fantasy young adult book that is sure to keep readers entertained from beginning to end.

Get your copy of Zombie Diaries today.

Mavis is a hilariously fun teenager in the teen fiction book Zombie Diaries. Her life is touched by love and suspense. This light modern fantasy story follows Mavis as she tries to understand her new reality, which includes being undead. As she navigates through this new world, she quickly learns that things are not always what they seem. With a friend’s help, Mavis tries to figure out what happened to her and why she is now a zombie. Along the way, she discovers that there is more to life than just being alive. Zombie Diaries is a fast-paced and thrilling read that will have you laughing out loud one minute and on the edge of your seat the next.

Mavis is terrified to let people know about her changing to a zombie.

Zombie Diaries is a YA novel that explores what it means to be a teenager in today’s world. The science fantasy book follows Mavis as she navigates through the world of dating and now zombies and ultimately comes to terms with who she is. Through Mavis’s struggles with changes, readers will gain insight into the coming-of-age process and what it means to be a young adult zombie in today’s world.

Zombie Diaries by R WK Clark is a unique urban fantasy. It is an engaging interpretation of a teen’s story. It appeals to readers looking for something different from the typical young adult fare.

Will Mavis find a cure before it’s too late?

Zombie Diaries is a teen action fiction book. Mavis is a young adult who turns into the walking dead. Every turn leads to something gory, often a hilarious result. Along the way, she must contend with her zombified nature and learn how to control her hunger for human flesh. It is an imaginative and exciting tale of a teenage outcast.

Zombie Diaries is a must-read for fans of epic sagas and is sure to keep you entertained from beginning to end. Whether you’re a fan of R WK Clark’s previous work, this is a sci-fi fantasy book that you won’t want to miss.

Will Mavis’s parents ever discover her dark secret?

In the young adult saga Zombie Diaries by R WK Clark, Mavis’s parents are left in the dark about why their daughter can’t stop snacking. However, the author throws in some hilarious twists and turns that will keep readers engaged until the very end.

Mavis is a young girl who is slowly turning into a deadwalker. She is terrified of what will happen to her if her parents find out, so she does her best to keep it a secret. However, as her hunger for human flesh grows, she finds it increasingly difficult to resist the temptation to snack on someone. While there is definitely an element of suspense, the overall tone of the action-adventure book is lighthearted and fun. Readers will no doubt remember this memorable modern fantasy saga for years to come.

Mavis finally has something in common with her classmates.

Zombie Diaries by R WK Clark is a horror-comedy novel about a teenage girl who has to survive high school. Mavis is your typical teenager, she doesn’t really fit in, and she’s constantly trying to figure out who she is. But there’s one big difference between Mavis and your average teenager. She’s a zombie. When Mavis suddenly finds herself among the dead, she has to navigate the horror and hilarity of high school all over again. With the help of her new friend, Mavis sets out to figure out what it means to be a rotter in a world that doesn’t quite understand her.

Sit back and enjoy this low fantasy of unforgettable science fiction adventure novel. The book offers hours of enjoyable surprise. This story will resonate with young adults and offer them a new perspective on survival. So grab a copy of Zombie Diaries and settle in for an exciting read. The book has been a success and has launched R WK Clark into a new phase of his writing career.

Will boys consider dating zombies?
In the supernatural fiction novel Zombie Diaries by R WK Clark, Mavis is a teenager who is also a zombie. Though this may be considered a spoiler, it’s not her primary concern. Mavis is hilariously funny and enjoys life, despite being undead. The story follows her as she navigates the challenges of being a teenager, including fitting in at school and dealing with boys. While some may find the idea of a zombie protagonist to be strange, Mavis is a relatable and lovable character that readers can’t help but root for. If you’re looking for a lighthearted and enjoyable read, Zombie Diaries is the perfect modern fantasy book for you.

Mavis is a supernatural fiction character who turns into a zombie. After turning, she believes that her new look should deter the boys, at least in her mind. Mavis is convinced that boys are only interested in looks and that they will not want to date her once she is a walking cadaver. Do you think Mavis should give them a chance and see what happens? Zombie Diaries by R WK Clark is a fast-paced, funny, and gore-filled page-turner that will keep you entertained from beginning to end.

The cure may be worse than the disease.
Mavis is a zombie in the sci-fi thriller Zombie Diaries by R WK Clark. The story follows her as she tries to survive in a world that has never seen a real zombie. Science fiction horror books often explore what would happen if the dead rose from their graves and started eating the living. This premise is usually used to explore humanity, morality, and survival themes.

Mavis is a zombie stuck in her ways and doesn’t want to change. She constantly craves human flesh and doesn’t see the point in anything else. However, she is eventually forced to confront her own mortality when Mavis starts to decompose. This leads her to question everything she thought she knew about herself and the world around her. Mavis is a rare type of zombie who can still think and feel, and she is determined to find a way to cure herself.

Will Mavis prove that zombies can be more than just mindless monsters?
Zombie Diaries by R WK Clark is a supernatural sci-fi comedy book that tells the story of a teenage girl who turns into a walking corpse. The paperback follows Mavis as she struggles to adapt to her new life and find a place in the world. Along the way, she must contend with the constant threat of eating. Despite all this, Zombie Diaries by R WK Clark is a funny, touching, and ultimately hopeful story that comments on societal divisions and celebrates the power of friendship and acceptance.

Mavis is your typical teen. She’s moody, obsessed with her appearance, and just wants to fit in. But there’s one big difference between Mavis and your average teenager. She’s dead. That’s right, Mavis is a zombie. But this teen doesn’t let that stop her from living her best life. Sure, she might be missing a beating heart, but that doesn’t mean Mavis can’t have fun. In fact, she’s always up for a good time – even if that means eating somebody’s brains.

Mavis is in a supernatural thriller situation.
Mavis is the undead who walks the earth searching for human flesh to feast on. However, she is not your typical zombie. Mavis is a supernatural being who has been cursed with a hunger for human flesh. As a result, she must constantly battle her craving for brains while also trying to stay alive in a world that wants to destroy her. Mavis is a powerful and terrifying force to be reckoned with, and her story is a fast-paced, action-packed novel that will keep readers on their toes.

Mavis is different from other zombies in that she can still think and feel. She has also retained some of her human memories. As a result, Mavis is trapped in a limbo state between life and death. Fortunately, Mavis is not alone in her struggle. She has a friend who helps her to navigate the undead world. Together, they will face danger, make new friends, and discover the importance of being alive… even if you are technically dead.

Will Mavis be able to find friends and even love despite her new appearance?
In the book Zombie Diaries, Mavis is a supernatural fiction character that goes through a metamorphosis. At the beginning of the story, Mavis is an awkward girl trying to find her place in the world. She is not popular, and she doesn’t have many friends. She believes that her new look will scare off all the boys when she turns into a walking corpse.

She is an ordinary girl dealing with the challenges of high school. When she hears the word zombie, she thinks she is going crazy. Along the way, she learns about teamwork, courage, and sacrifice. Mavis is a solid and determined character. This young adult contemporary fantasy is a tale of love and suspense, with a dash of comedy thrown in for good measure. Readers are sure to enjoy Zombie Diaries by R WK Clark an unforgettable modern fantasy saga.