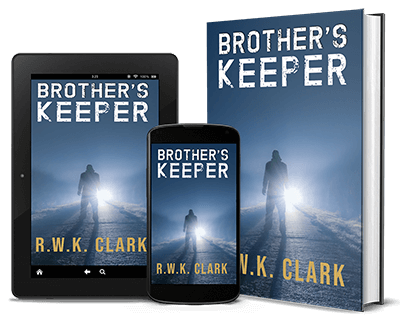 Burdensville has a few skeletons in its closet… and they’re piling up fast. Scott Sharp thought he’d grab a bite to eat during a brief layover at a small-town train station. The sun was shining, the town was quaint, and the waitress sure was cute. What could possibly go wrong?

Do you like a good mystery thriller? Brother’s Keeper by R WK Clark is the perfect blend of light-hearted fun and spine-chilling suspense. It’s the ideal book to curl up with on a cold winter night. You’ll be turning pages long into the night as you try to figure out what happened to Scott Sharp. This book is so much more than your average mystery thriller novel. It’s a story about murder, love, and betrayal. You won’t be able to put it down until you reach the shocking conclusion. Pick up a copy of Brother’s Keeper today!

From author R WK Clark comes this terrifying story about a town’s hidden dark secrets. A misunderstood act of chivalry places Scott at the mercy of a rural community hiding a sinister secret. As they say, no good deed goes unpunished, and for Scott, that punishment could be his life. Sit back and enjoy this stay-up-all-night serial killer psychological thriller.

Ready for a heart-pounding thriller? Brother’s Keeper is the perfect book for anyone who loves a good scare. It’s packed with suspense, mystery, and thrills that will keep you glued until the last page. You’ll be dying to know what happens next as Scott tries to unravel the townspeople’s secrets and figure out why he’s being targeted. With plot twists around every corner, you won’t want to put this book down. Pick up a copy of Brother’s Keeper today!

Get your copy of Brother’s Keeper today.

Are you looking for a new Psychological fiction book to read? Brother’s Keeper is the perfect book for anyone who loves a thrilling psychological fiction book. It’s full of suspense and will keep you fascinated until the final page. Ronnie becomes paranoid and withdrawn, lashing out at anyone who he perceives as a threat. While this behavior may seem irrational to those on the outside, readers are able to see the world from Ronnie’s perspective and understand his motivations.

By experiencing the world through Ronnie’s eyes, readers are better able to empathize with him and gain a greater understanding of mental illness. You’ll be dying to know what happens next in this thrilling tale of murder and suspense. With each chapter, the mystery only deepens, and you’ll be desperate to find out what secrets this small town is hiding.

With each chapter, the plot thickens, and you’ll be desperate to find out what secrets this small town is hiding. Psychological fiction books can provide excellent insight into the mind of a killer. If you’re looking for a new psycho-thriller to read, Brother’s Keeper is the perfect book for you. Purchase Brother’s Keeper today on Amazon or Barnes & Noble! Psychological fiction books offer readers a unique opportunity to explore different psychological concepts in a safe and non-threatening environment. They can help people understand the antagonist’s thoughts and feelings. Ronnie’s psychosis provides a unique lens through which to view the world, offering insights into the human condition that might otherwise be difficult to obtain. If you are looking for a psychological fiction book, Brother’s Keeper by R WK Clark is chocked full of suspense and mayhem that will keep you fascinated until the final page.

Ronnie provides readers with a unique perspective of his world and an understanding of his motivations. His experience of psychosis is characterized by hallucinations, delusions, and disordered thinking. By exploring the motivations behind a killer’s actions, psychological fiction books can help shine a light on the dark corners of the human soul. In doing so, they can help us to understand why some people are driven to commit unthinkable acts of violence.

Readers are constantly looking for new thrillers on psychology and crime, but there is a lack of quality books that provide in-depth psychological insight into killers’ minds. Existing books on the topic are often dry and opaque, making it difficult for the average reader to understand how mental illness can lead to deadly violence. Brother’s Keeper by R WK Clark provides readers with a thrilling exploration of a fictional killer’s mind.

What are examples of psychotic behaviors?

There are many examples of psychotic behaviors in psychological fiction books. For instance, in Brother’s Keeper, the main antagonist Ronnie displays numerous symptoms of psychosis, such as delusions and hallucinations. He also struggles with paranoia and feels disconnected from reality. These fictional examples provide insight into the mind of a person who has psychosis. While not all people with psychosis will display the same behaviors, these examples give a general idea of the types of conduct exhibited by someone who has this mental illness.

People with psychosis are often misunderstood and feared. Ronnie, the antagonist in Brother’s Keeper, is a perfect example of how a person with psychosis can be misinterpreted and feared by those around them. His misconceptions and fantasies lead him to commit heinous crimes, ultimately destroying his relationships with others. R WK Clark provides an insightful look into the mind of someone suffering from psychosis through his psychological fiction book, Brother’s Keeper. This novel offers readers a better understanding of what it is like to live with this mental illness.

As a result of Ronnie’s mental state, he became increasingly isolated from the world around him, and his behavior became more and more erratic. In addition to providing entertainment, these books can also help to educate and enlighten readers about the psychological factors that can lead someone to commit murder. They offer an invaluable resource for anyone interested in understanding the criminal mind.

What is a psychological novel in literature?

Psychological fiction is a genre of literature that explores the inner workings of a character’s mind. Psychological novels often deal with mental illness, paranoia, and obsession themes. While these novels can be harrowing, they can also be highly insightful, providing readers with a new perspective on the human condition. Psychological fiction is often lauded for its ability to get inside a character’s head and understand their motivations. If you’re looking for a psychological novel that will stay with you long after you’ve finished reading, check out some of R WK Clark’s books.

It’s hard to get inside a character’s head and understand their motivations. Characters in psychological fiction are often difficult to understand, as they often suffer from mental illness or paranoia. It’s difficult for readers to connect with them on a personal level. R WK Clark’s Brother’s Keeper is a psychological horror novel that takes this challenge head-on. The antagonist, Ronnie, is a man struggling with a personality disorder. Through Ronnie’s psychosis, readers are able to see the world from his perspective and understand his motivations.

What is a psychological thriller novel?

In psychological fiction books, psychotic behavior is often characterized by paranoia, delusions, and hallucinations. However, it is essential to note that not all individuals who experience these symptoms are considered to be clinically psychotic. For example, some people may have brief periods of paranoia or delusions in response to a stressful event, but this does not mean they have a mental illness.

Similarly, many people have occasional hallucinations, such as hearing a voice calling their name when no one is there. While these experiences can be unsettling, they do not necessarily indicate a mental health condition. Psychotic behaviors become a concern when they are persistent and interfere with an individual’s ability to function in daily life.

It can be problematic to determine whether a person’s behavior is due to a mental illness or simply due to stress or another life event. Individuals who are experiencing psychotic symptoms can often feel scared and alone. They may not know that what they are undergoing is caused by a mental illness and may instead believe they are cursed or possessed. This feeling leads Ronnie to further isolation and distress. R WK Clark’s psychological fiction books offer an in-depth exploration of different types of psychosis. The books provide insight into the minds of both the antagonist and protagonist, creating a great understanding of this complex condition.

What is behavioral psychosis?

Behavioral psychosis is a psychological condition that can cause people to live in a fantasy world where their actions have no consequences. This disorder can sometimes be associated with long-term effects of gaslighting and intimidation, leading to a mental breakdown. A psychotic breakdown is any nervous breakdown that triggers symptoms of psychosis. In Brother’s Keeper, you will follow the journey of a man who has behavioral psychosis. His life spirals out of control as he loses touch with reality and murders innocent people. Psychological fiction books provide an in-depth look at this condition and its effects on both the individual and society.