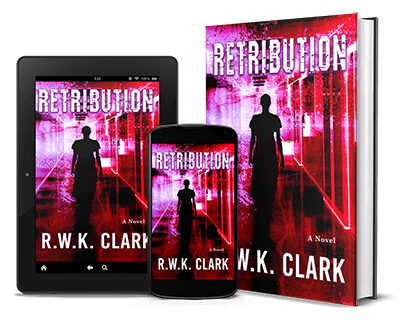 Marissa Thomas’s childhood story was that of Hospitals, Doctors, and Clinics. She was sure she would die before they figured out what was causing her cycle of sickness.
Now an adult, Marissa felt a calling to help others in need. She became the finest head nurse one small-town hospital had ever seen. She was hailed a hero, saving little lives who were also on the brink of death.
Or were they?

Author RWK Clark returns with an emotional roller coaster filled with twists, turns, shocks, and surprises in this serial killer psychological thriller. A new head nurse is prowling the pediatric ward, and while she seems to be the biggest blessing to join forces there in a long time, this nurse holds on to a dark and twisted secret.
Who will be the next to bring forth the monster?

In this crime-action fiction novel, the story follows Marissa, a sociopath who works in a small-town hospital. When a patient almost dies under her care, Marissa begins to spiral out of control. As she crosses the line between right and wrong, she becomes more and more dangerous. Eventually, her quest leads her down a dark path that could have deadly consequences. Retribution is a suspenseful, frightening, and horrifying book that will keep readers on their toes.

Retribution by R WK Clark is a medical fiction novel that tells the tale of Marissa, an R.N. working in a small-town hospital. The reader is drawn into her life and feels horror and compassion for her. Her world unravels as the allegations pile up and the investigation into the injuries intensifies. However, she tries to cover up her crimes and escape detection. Retribution is a suspenseful, frightening book that will keep readers on the edge of their seats. A perfect choice if you like domestic thrillers.

Get your copy of Retribution today.

A psychological fiction paperback novel that explores the dark side of human nature. Marissa is a complex character who is both frightening and sympathetic. In this psychological thriller story, Marissa is a caregiver when a patient is mysteriously hurt. The evidence seems to point to her. She becomes desperate to clear her name. But the more she tries to uncover the truth, the more she realizes that she may be the only one who knows what really happened.

Marissa is the target of revenge, and her time is running out, and she may not be able to escape the retribution of the people she’s crossed. With her career and freedom on the line, Marissa must race against time to solve the mystery before it’s too late. The suspenseful vigilante justice thriller plot captivates readers and holds them hostage. It is a genuinely chilling book that will leave you feeling unsettled long after reading it. Retribution is a suspenseful and terrifying U.S. horror fiction that will keep readers guessing until the very end.

Horror literature often deals with fears and anxieties beyond our everyday experiences. They may be fears of the dark, the unknown, or death. Marissa has committed a series of brutal crimes in the tale, and she is now being hunted. As the novel progresses, the suspense and fear build to a shocking climax, making Retribution by R WK Clark a genuinely horrifying read. Marissa’s eye-opening descents into madness as she tries to evade the truth.

Marissa is facing accusations for her role in a patient’s injury. As she races to stay one step ahead, Marissa must also face her dark past. As a medical crime thriller, Retribution is a page-turner that will keep you guessing until the very end. When Marissa becomes the head nurse at her small-town hospital, she quickly establishes herself as a medical miracle worker. But when strange accidents start happening to her patients, revengeful people set out to uncover the truth. But as they get closer to the culprit, they realize that they may be in over their heads.

Retribution is a heart-pounding vigilante thriller read with twists and turns that will keep you on the edge of your seat. This truly suspenseful literary fiction novel follows her as she tries to cover up her crimes and deal with the psychological aftermath. The book is expertly written, creating a tense and frightening atmosphere that will keep readers on a cliff. If you’re looking for page-turning medical thrillers, this is the perfect paperback for you to read.

The novel Retribution by R WK Clark is a psychological thriller exploring Marissa’s heinous crimes and mental motivations. As well as the effects of her actions on those around her. The suspenseful and frightening tale will keep readers hooked from start to finish. If you love crime thrillers with twisty plots, this is a must-read for fans of literary fiction.

The dark secret is a monster who preys on those who are weak and vulnerable in this medical crime thriller book. Who will be Marissa’s next victim? This paperback novel is terrifying and disturbing and will make readers uneasy. Retribution is a pulse-pounding thriller with taut suspense and chilling twists to keep you guessing until the end. A perfect choice for readers who love serial killers.
The Amazon Kindle and Barnes & Noble Nook are lightweight, perfect for travel. Download some of RWK Clark’s books today!

It becomes clear that Marissa may not be the hero she appears to be.

Retribution by R WK Clark is a serial killer psychological thriller paperback book that will keep readers guessing until the very end. Marissa, the protagonist, seems to have it all, a successful career as a nurse and a small town that adores her. But beneath Marissa’s perfect exterior lies a dark secret. She may be a serial killer. As the novel progresses, R W K Clark expertly weaves together clues and red herrings, keeping readers guessing until the very end. Retribution is a serial killer psychological thriller with compelling characters and nail-biting suspense that will keep readers hooked from start to finish.

In this murder mystery thriller, the narrative follows Marissa, a head nurse. She seems to have a gift for saving the lives of her patients. Retribution is a fast-paced, edge-of-your-seat read that will keep you guessing until the very end. This crime-action fiction novel follows Marissa is, a psychopath caregiver who takes her job very seriously. When the hospital discovers that one of the patients in her care has been wrongfully hurt. They soon accuse her of a crime. Marissa is a brilliant and resourceful woman, and she will stop at nothing to get what she wants.

The book is full of suspense and excitement, and it will keep you on the edge of your seat from beginning to end. Suppose you’re looking for psychological thrillers that will keep you up all night. In that case, Retribution by R WK Clark is definitely the one for you.

Marissa’s secret of her past is hidden away.

Retribution is a medical crime thriller by author R.W.K. Clark. While Marissa appears to be a hero who saves lives and seems to be a big blessing at first. However, she soon reveals that she holds on to a dark and twisted secret. Throughout this domestic thriller book, readers are kept in suspense as they wonder whether Marissa will be able to keep her secret hidden. Or whether her past will catch up with her. As the tension mounts, Retribution becomes a truly captivating read. Is Marissa a sociopath who takes pleasure in harming her patients?

Retribution is an American horror novel by R WK Clark. The paperback book tells the narrative of Marissa, a malevolent R.N. who works in a hospital. She is also skilled in using her looks to manipulate those around her. Retribution is an ominous, scary, and ultimately horrifying tale that will keep readers full of anticipation.

Retribution is a serial killer psycho-thriller that follows the story of a nurse in the pediatric ward. As the book progresses, the reader is left wondering whether the nurse will be able to keep her secret hidden or if she will be caught and brought to justice. Retribution by R WK Clark is a fast-paced and suspenseful read that will keep readers overloaded with anxiety from beginning to end.

Marissa is a malicious nurse in this crime fiction story. As the book progresses, it becomes clear that Marissa is not only dangerous but also cunning and calculating. She targets vulnerable patients and uses her position of power to harm them. The suspense builds as the reader wonders who will be her next victim. The ending is shocking and satisfying, making Retribution a must-read for fans of medical fiction and crime fiction. In today’s digital age, more and more people are reading books electronically.

Two of the most popular e-readers on the market are the Kindle and the Nook. Both devices offer convenience wherever you go. Read some of R WK Clark’s novels on Kindle Unlimited today!

What is a medical crime thriller?

A medical crime thriller is a story that combines the suspense of a crime drama with the medical setting of a hospital. In this type of story, the reader is introduced to anything from a patient who dies under mysterious circumstances. Or a serial killer targeting the hospital staff.

In a medical crime thriller, the reader gets to follow the suspenseful plot and learns about the inner workings of a hospital and the people who work there. This can be an exciting and educational experience and a thrilling one. Suppose you are a fan of crime dramas and medical dramas. In that case, the medical crime thriller Retribution is the perfect book for you.

There are many different genres of thrillers, each with its unique elements. Medical crime thrillers tend to focus on the dark side of the medical profession, exploring criminality. On the other hand, a psychological thriller delves into the mind of the protagonist, often raising questions about identity and reality. Meanwhile, psychological horror uses suspense and scare to explore our deepest fears. While all three genres share some commonalities, each offers its distinct thrills.

In the premise of Retribution, the reader is taken on a suspenseful journey through a hospital. Marissa is a dedicated nurse who cares deeply about her patients. Could her dark past lead to severe consequences for the pediatric ward?

If you are a fan of crime dramas and medical dramas, then Retribution by R WK Clark is the perfect novel for you. This page-turning thriller will raise the hairs on your neck. Order your copy today!