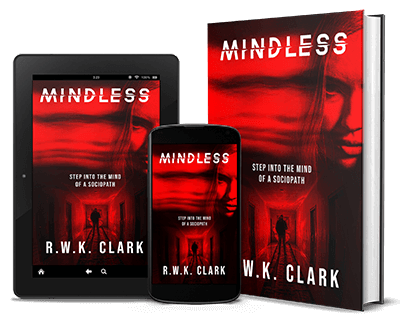 Hi, my name is Melvin Frink. I was once a promising medical student concentrating on neurosurgical procedures. More specifically, I was confident that we could justify the lobotomization treatment in some patients.
Controversial? Yes.
But, I was making headway and earning the respect of my peers, until a terrible accident put me in a coma. Three years later, I awoke with renewed determination.
Mother wouldn’t like what I had in mind. Or would she?

An unspeakable crime at a time when R WK Clark’s brand has never been stronger, he has delivered one of his most unsettling stories to date. Step into the mind of a sociopath. Melvin finds himself harboring fantasies and psychotic thoughts that lead him down a dark path.
Get ready to meet the most hideous menace ever in this spine-tingling serial killer psychological thriller.

Get your copy of Mindless today.

If you’re interested in reading a chilling psychological thriller that will keep you guessing until the very end, then be sure to pick up a copy of Mindless. Melvin is a sociopath plagued by dark thoughts and fantasies, and his mother supports his goals, no matter what the cost. As a result, Melvin’s mother is often willing to look the other way when it comes to her son’s questionable behavior.

However, there are times when even she is unable to deny the truth about her son’s character. This creates a conflict within her that leads to an intriguing psychological thriller. The reader is left guessing whether Melvin’s mother will be able to accept her son for who he is. Or whether she will be forced to confront the dark reality of his actions. So if you’re looking for a blood-curdling read, be sure to check out Mindless. If you’re looking for a chilling new serial killer thriller, then don’t miss out on Mindless. Melvin is the villain, a ruthless killer who takes great pleasure in causing pain and terrorizing his victims. He’s clever and manipulative, always staying one step ahead of the police. His crimes are grisly and gruesome, leaving everyone traumatized who crosses his path. Despite his propensity for violence, Melvin is always careful to avoid getting caught.

Psychological horror is a genre that taps into our deepest fears and anxieties. On a surface level, it can be thrilling and exciting to read. But on a deeper level, it speaks to something inside of us that we may not even be aware of. Horror books force us to confront the things that we’re afraid of, and in doing so, they help us understand them better.

They also provide us with a sense of release; by facing our fears in a safe and controlled environment, we can overcome them. In short, psychological horror is a genre that is both entertaining and instructive. It’s no wonder that it continues to be one of the most popular genres in literature.

Melvin had always been a bit of an introvert. But lately, he had begun to harbor dark thoughts and fantasies. He would lie in bed at night, imagining how he could hurt the people around him. Slowly but surely, these dark fantasies began to take over his life. Get ready to be riveted by the unfolding drama and the inability to put this book down. Order your copy of Mindless today.

Why We Love to Be Scared: The Psychology of Horror

Psychological horror taps into our deepest fears, exploiting our natural vulnerability and making us question what we thought we knew about the world. On a psychological level, horror can provide a much-needed release from the everyday stresses of life. It can also serve to process our own fears and anxieties in a safe and controlled setting. In many ways, psychological horror is the ultimate escape from reality. It allows us to confront our darkest desires and emerge unscathed on the other side. For these reasons and more, it’s no wonder that psychological horror is one of the most popular entertainment genres.

Melvin is a serial killer that gets pleasure from causing pain and terrorizing his victims. His psychological horror leaves a trail of shattered lives and families in his wake. For Melvin, the thrill comes from knowing that he has the power to inflict such terror. His victims are always carefully selected, as he takes great care in planning. Melvin is a typical sociopath – charming and intelligent, but entirely devoid of empathy in many ways. This lack of compassion allows him to carry out his gruesome crimes without any remorse. For Melvin, killing is simply a means to an end – the ultimate way to exert his power over others.

If you’re interested in learning more about Melvin and his twisted world, check out R WK Clark’s book Mindless a psychological horror. It provides a detailed account of Melvin’s crimes and sheds light on the motivations behind his horrific behavior. Order your copy today!

What Makes Psychological horror So Terrifying?

Melvin is the embodiment of our darkest fears. He represents the things that we cannot see or understand, which haunt us in the middle of the night. In psychological horror novels, Melvin is described as a thing that should not be, a creature that defies all logic and reason. He is the personification of our own fear and insecurity in many ways. We are afraid of him because we do not understand him, and we do not understand him because we fear him. Melvin is the thing that we are most terrified of, but he also makes us most human. Without him, we would be lost in a world of darkness.

If you want to learn more about Melvin and the psychological horror genre, then be sure to check out Mindless by R WK Clark. This psychological thriller book explores the origins of Melvin and provides a detailed account of his reign of terror. Available on Amazon and Barnes and Noble.

Both feature characters struggling with mental health issues. Medical thrillers typically focus on the dark side of the healthcare system, exploring themes of negligence and corruption. In contrast, psychological fiction is more introspective, focusing on its characters’ internal struggles. These stories often delve into deep-rooted fears and traumas, providing a frightening look at what might lurk inside us. If you’re looking for a medical thriller, Mindless is a good choice.

Why We Love to Be Afraid The Psychology of Fear

Psychological horror is one of the most popular genres in literature. Fear can be exhilarating, providing a rush of adrenaline that helps us feel more alive. It can also allow us to bond with others, as we share the collective experience of being scared. Whether we’re reading a scary novel or riding a roller coaster, fear is a powerful emotion that fascinates and delights us.

Psychological horror fiction taps into our deepest fears and anxieties. Mindless, the title character in this 2022 cult classic, is a perfect example of this. Melvin appears to be nothing more than a harmless nerd on the surface. But there is something about him that is just… off. His wide grin seems more like a leer, and his eyes bore into your soul. He seems to know exactly what you’re thinking… and what you’re afraid of.

It’s this sense of unease that makes Melvin so captivating and so terrifying. We can’t help but be drawn to him, even as we fear what he might do next. That’s what makes psychological horror so effective. It preys on our fears and insecurities and does so in entertaining and spine-chilling ways.

Horror fiction continues to fascinate and delight us. It taps into our deepest fears and anxieties and does so in an entertaining and gut-wrenching way. When we’re reading a scary novel fear is a powerful emotion that never fails to captivate us. If you’re looking for a psychological horror novel that will keep you up at night, check out Mindless. Written by a guru of horror, R WK Clark will send shivers down your spine. Order your copy today!