A laboratory breach turns into a floating disaster in this apocalyptic thriller.

It was supposed to be an exotic adventure that would help bring a conflicted family closer together. Instead, a majestic cruise off the coast of Belize becomes an unimaginable fight for survival.

Unbeknownst to them, the Harringtons bring more than their troubles aboard… they bring a zombie pandemic.

Does Ariana have what it takes to stop the spread before they reach the next port?

Dead in the Water by R WK Clark is a thrilling fast-paced action novel that follows the story of a family vacation gone horribly wrong. When a laboratory breach turns into a floating disaster, the vacationing Harringtons find themselves in the middle of a zombie pandemic. With the help of Ariana, a brave and resourceful teenager, they must find a way to stop the spread of the virus before they reach the next port. Dead in the Water is a fast-paced and suspenseful book that will keep you on pins and needles from beginning to end.

Get your copy of Dead in the Water today.

Don’t miss the thrilling suspense novel from author R WK Clark. What happens when a dream vacation becomes a fight for survival? This post-apocalyptic science fiction novel pulsates with horror and evil that will have you on edge.

When passengers book a cruise, they expect a relaxing vacation with plenty of opportunities to take in the beautiful scenery and enjoy luxurious amenities. However, their dream vacation quickly turns into a nightmare for the passengers of the ill-fated Fantasy Lines cruise. After a zombie outbreak, Ariana soon finds herself fighting for her very survival in the middle of the ocean.

As the ship rapidly becomes overrun with the undead, it is clear that there is no safe haven to be found. With nowhere to run and no one to trust, the passengers have to band together if they want any hope of making it off the ship alive. This horror-thriller-sci-fi novel examines what happens when a group of people is forced to face their darkest fears. 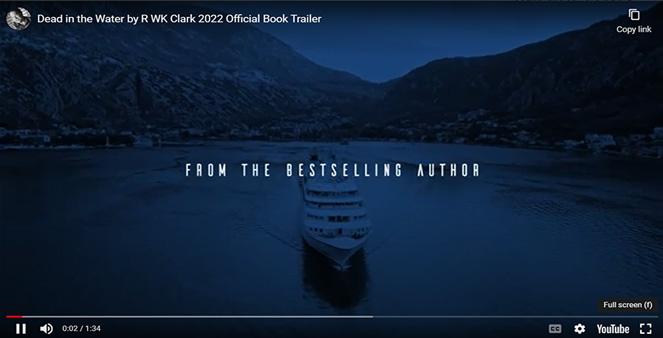 Will Dead in the Water by R WK Clark leave readers desperate for more?

This pulse-pounding tale follows a group trying to escape the infection, with horrifying scenes of undead corpses and desperate attempts at survival. Ariana Harrington is one of the passengers on the cruise. As the ship sails across the ocean, the virus begins to spread and decimate the population of the cruise liner, leaving only a handful of survivors. Among them is Ariana, who is struggling to survive in a world full of undead creatures. Meanwhile, David from the CDC works around the clock to stop the spread and find the ship. As Ariana races for survival, she must also battle Captain James McElroy and his army of undead followers. The question is, will she succeed? Only time will tell.

The CDC tries to contain the outbreak, but are they too late?

Dead in the Water by R WK Clark is an action-packed zombie horror novel, and it’s one of the most terrifying books ever. The premise is simple: a virus emerges and threatens a global pandemic of zombies. The virus spreads like wildfire, and soon an entire cruise ship is overrun with zombies. Dead in the Water is not your typical zombie book. It’s gritty and realistic, and it will leave you feeling scared and unnerved long after you’ve finished reading it. Dead in the Water is highly recommended if you’re looking for a terror novel that will truly haunt you. A must-read for fans of apocalyptic horror.

In this apocalypse thriller, David Umbridge from the CDC searches for clues about a virus that could cause a global pandemic of zombies. The novel follows the CDC’s investigation as they try to find the source of the virus and stop it. They eventually discover that the virus was created by a mad scientist who wanted to create a “perfect” human race by eradicating death. However, the virus got out of control and started infecting people all over a ship. It’s up to the CDC to find a way to stop the spread of the virus and save humanity from extinction.

Will Ariana stop a zombie epidemic that threatens to cause a global pandemic?

In this apocalyptic horror novel, Ariana fights for her life against the evil undead. The cannibals are relentless in their pursuit of her, and she must use all her strength and ingenuity to survive. The book is thrilling and suspenseful, with plenty of gore and violence to keep readers on their toes. It’s a fast-paced read that will keep you entertained from beginning to end. The novel also follows the crew of the Fantasy Lines as they attempt to contain the virus and prevent it from spreading further. If you’re a fan of horror novels, this is one you won’t want to miss.

The story also follows the passengers as they become infected with a deadly virus that turns them into zombies. With scares around every corner, this book is sure to keep you fascinated. However, it is not just the action and fright that make this book great. The characters are also well developed and believable, making you care about their fate. If you are looking for a book that will keep you distracted, Dead in the Water by R WK Clark is a great choice.

What is an apocalypse thriller?

Apocalypse thrillers are a subgenre of science fiction. These horror-action books typically depict a catastrophic event or series of events leading to the world’s end. The novels often feature heroes who must fight for survival in a ravaged and chaotic landscape.

Usually, in an apocalyptic thriller, the planet is devastated by a catastrophic event, such as a nuclear war, an asteroid collision, or a pandemic. The survivors must then struggle to survive in a world that has been reduced to ruin. Apocalypse thrillers often feature large-scale disaster scenes and scenes of mass panic and destruction. They usually end with the survivors banding together to rebuild civilization.

Some successful examples of the genre include Dead in the Water by R WK Clark. This book has been praised for its tense, thrilling action against a bleak and hopeless backdrop. It tells the story of Ariana struggling to survive in a post-apocalyptic wasteland aboard a cruise liner. The novel is dark and harrowing and offers audiences a taste of the desperation and terror that would come with the end of the world.

There’s nothing quite like the thrill of an apocalyptic tale when it comes to movies and books. In these stories, a catastrophic event or series of events leads to the world’s end as we know it. The heroes must fight for survival in a ravaged and chaotic landscape, often against impossible odds.

Why are apocalypse thrillers so popular?

Science fiction horror novels like Dead in the Water have become increasingly popular in recent years. These books explore the idea of a world in which society has collapsed, and humanity is struggling to survive. These stories offer a way to explore their fears about the future in a safe and controlled environment. They also allow readers to vicariously experience the thrill of being in a situation where every decision could mean life or death. In a world that often feels out of control, apocalypse thrillers provide a momentary respite from our daily worries and anxieties. In short, they offer us a glimpse of a world in which we are the ones in charge.

What to look for in an apocalypse thriller

Science fiction horror fans know that the best apocalypse thrillers offer up a believable scenario while still keeping the suspense high. A good science fiction horror novel should make you think twice about hitting the snooze button on your alarm clock in the morning. They let you find yourself in a world where the dead have returned to life and are hungry for human flesh.

A good science fiction horror story should have a premise rooted in science, even if it is just loosely based on scientific fact. This helps make the story more believable and, therefore, more suspenseful.

The stakes should be high in an apocalypse thriller. If the heroes fail, the world will come to an end. This creates a sense of urgency that keeps the reader engaged.

The best apocalypse thrillers keep the suspense level high from beginning to end. You should never be able to predict what is going to happen next.

To create a genuinely terrifying experience, some apocalypse thrillers rely on gore and violence. If this is something that you are not comfortable with, be sure to choose a book that is less graphic in its depiction of the end of the world.

Now that you know what to look for in an apocalypse thriller. Dead in the Water is a favorite that is sure to keep you on the edge of your seat.

Why is Dead in the Water a good choice?

Dead in the Water is an excellent choice for apocalypse thriller fans because it offers a believable scenario while still keeping the suspense high. In this novel, a group of survivors finds themselves stranded on a ship after a virus has wiped out most of the other passengers. Ariana is a brave and resourceful teenager who finds herself in the middle of an epidemic.

Together, they must find a way to stop the spread of the virus before they reach the next port. With Ariana’s help, they might stand a chance. They must use all of their ingenuity and courage to survive in a world now ruled by the dead. Dead in the Water is a page-turner that will keep you on the edge of your seat until the very end.