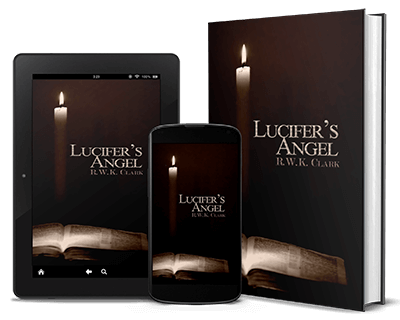 Author R WK Clark delivers a classic occult thriller—with a twist. Sarah Hathaway is the sweetest, kindest person you’d ever hope to meet. She has everything she could ever hope for. But when multiple tragedies strike, she turns away from the church, pursuing instead the life of a witch. At the end of the day, witchcraft seems to make her life better. But what’s lurking just behind Sarah? An unforgettable and terrifying classic of modern American horror from the undisputed master, R WK Clark.

Do you like a good thriller with a bit of occult mixed in? We all know that horror is a popular genre, but it’s hard to find something truly terrifying. Horror fans are always looking for the next big scare, and many recent releases have let them down. R WK Clark is a fantastic author who knows how to keep you on the edge of your seat. His books are always filled with suspense and action, and Lucifer’s Angel is no exception.

This occult thriller will keep you up at night with its blend of suspense and horror. R WK Clark is a whimsical author who knows how to write a page-turner. You will not be able to put this book down. A captivating read that will stop your heart from wondering what happens next. With its mix of horror and occult, it will thrill any reader. Purchase Lucifer’s Angel today on Amazon or Barnes & Noble!

Get your copy of Lucifer’s Angel today.

Why should you be reading Lucifer’s Angel if you’re a fan of supernatural books?

If you’re looking for a good supernatural thriller, this best occult book is for you. Lucifer’s Angel by R WK Clark is a great read. The best thing about it? The protagonist Sarah is tenacious and wants answers. Sarah’s doubt happens to run deep, and her heart is so broken that she turns away from the church, pursuing the life of a witch instead. She chooses to turn to witchcraft strictly out of revenge toward God. “If you won’t give me my way, I’ll find someone who will,” is her thought process. Sarah’s actions make the suspenseful story even more terrifying.

This paperback will keep your attention if you love thrillers with some horror mixed in. The occult is a fascinating topic, and Lucifer’s Angel by R WK Clark does a great job exploring it in this fiction thriller. This best occult book is captivating readers and will stop your heart from wondering what will happen next. Look no further than Lucifer’s Angel. This supernatural thriller is a great read that will keep you guessing all night. So what are you waiting for? Purchase Lucifer’s Angel today!

Are you scared of the dark? You will be after reading this book!

Lucifer’s Angel is the best occult book that explores the supernatural world. The suspense thriller follows Sarah as she learns about the occult realm and the supernatural beings that inhabit it. She eventually knows that the evil plans to use her powers against her. The novel is full of occult lore and supernatural thrills.

Occult novels are often surrounded by a certain amount of mystery and intrigue. Lucifer’s Angel by R WK Clark is no exception. This supernatural book of the damned thriller tells the story of Sara. In this best occult book, she is searching for the power to make her wishes come true. Her dabbling in witchcraft unleashes a nightmare that threatens to destroy her. The only hope lies in her hands. She must find the courage to face the demons head-on. Lucifer’s Angel is a page-turner with nail-biting suspense and a touch of romance that will keep readers engaged from start to finish. If you love supernatural books, then what are you waiting for? Go purchase Lucifer’s Angel today!

Read Lucifer’s Angel tonight and sleep with the lights on!

This best occult book is full of suspense and twists, and fans of the genre will not be disappointed. Sarah is a fascinating character, and the author does a great job of world-building. Lucifer’s Angel is an excellent choice if you’re looking for a suspenseful thriller that will keep you speculating.

Respectable best occult books and supernatural books have been gaining popularity in recent years, and Lucifer’s Angel is one of the best in the genre. Sarah quickly learns that hidden dangers lurk around every last corner in this world, and matters of spirituality are no exception. One fateful day, she stumbled upon a novel that seemed to call out to her. Enticed by its power, she opened it and began reading. Soon after, she was surrounded by eerie darkness.

Why Lucifer’s Angel is a tremendous occult thriller

Lucifer’s Angel is a fascinating occult thriller for many reasons. First, it tells the story of a young woman drawn into the mysterious occult world. After turning away from the church beliefs, Sarah begins looking for novels to learn from. The bookshop she ends up at is full of noble best occult books, and the heroine soon finds herself in over her head. Lucifer’s Angel is full of suspense and mystery, keeping readers wondering until the end.

This horror-thriller explores the nature of Good and Evil, and the heroine must ultimately choose between them. This premise makes for a complex and thought-provoking read that will stay with you long after you finish it. In short, Lucifer’s Angel is an entrancing occult thriller that is sure to keep you entertained from beginning to end. Looking for the best occult books, look no further than Lucifer’s Angel by R WK Clark. This supernatural thriller is a great read that will raise the hairs on your neck. Read it now on Kindle Unlimited.

The suspense and horror elements of Lucifer’s Angel

Many occult and supernatural books contain suspense and horror elements, and Lucifer’s Angel is no exception. The novel tells the story of a young woman who discovers that she can learn witchcraft. At first, she is content to do simple spells, but she realizes that she must take action when she witnesses a horrific act. This event sets her on a path of terror. It leads her into conflict with a powerful demon, and the stakes are high not only for her own life but for the lives of those she loves. The paperback’s suspense and horror elements ensure the readers are on the edge of their seats, and the fast-paced plot will keep them coming back for more.

Lucifer’s Angel by R WK Clark is a well-written fantastic occult thriller. If you’re a fan of suspenseful thrillers with a touch of horror, this paranormal thriller is for you. The story is well-written and full of tension, and the characters are compelling and thought-provoking. The plot will keep you speculating until the very end, and the ending will leave you wanting more. Lucifer’s Angel is a must-read if you’re looking for an excellent best occult book. Pick up your copy today from Amazon or Barnes & Noble!

Do you like thrilling reads with a supernatural twist? Then Lucifer’s Angel is the book for you. Supernatural literature is a genre that often includes elements of horror, fantasy, and science fiction. The natural world is often disrupted by events that science cannot explain in these stories. Supernatural literature often explores the dark side of human nature, and many stories in this genre end with tragedy or fearful consequences.

At its core, supernatural literature seeks to instill a sense of wonder and awe in its readers. These stories can transport us to otherworldly places, where anything is possible. In a world that is often mundane and predictable, supernatural literature offers us a chance to escape into a world of our imaginations. Lucifer’s Angel by R WK Clark tells the story of a witch who must use her supernatural powers to fight evil. It has clever writing and a fast-paced plot that will keep you entertained from beginning to end. Order your copy of Lucifer’s Angel now!

Do you like thrilling paranormal reads? Then Lucifer’s Angel is the book for you. Paranormal literature can be defined as stories containing supernatural or unexplained elements. These elements may include vampires, witches, and other creatures. While paranormal literature has been around for centuries, it has seen a resurgence in popularity. Many readers enjoy the suspense and excitement of reading about the unknown. In addition, paranormal stories often blur the lines between fact and fiction, making them all the more captivating.

Whether you’re a fan of horror or simply curious about the paranormal, there’s sure to be a paranormal story that appeals to you. Lucifer’s Angel takes readers on a dark and suspenseful journey into the occult, where they will be captivated by the story of a young girl who discovers her true hidden power – and her destiny. This paranormal book will keep you up at night with its fast-paced plot and chilling twists. Will our heroine be able to save herself? Find out today. Pick up your copy of Lucifer’s Angel now!

Do you like horror stories? Lucifer’s Angel is the perfect read for horror fans. The occult generally refers to anything hidden or outside of mainstream knowledge. It often includes topics like magic, supernatural creatures, and otherworldly phenomena. On the other hand, horror typically seeks to scare or startle its audience. While there is some overlap between them, they are generally distinct fields of interest.

The occult usually has a more serious and academic tone, while horror is usually intended for entertainment. Both occult and horror can be used to explore dark or taboo subject matter, and both can be unsettling or even terrifying. Lucifer’s Angel is a dark, thrilling tale about the occult that will keep you on the edge of your seat. You won’t be able to put it down. This thriller book is so captivating you will be up all night reading it. Purchase Lucifer’s Angel by R WK Clark today on Amazon or Barnes & Noble!