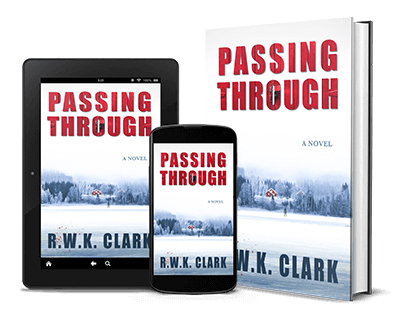 Venture into the mind of this obsessed insane killer, Passing Through by R WK Clark is a chilling and unforgettable thriller.
Little do they know a horrible murderer has escaped from prison just as the small town is about to get hit with a record blizzard. But the trusting innocence of these small-town people will prove to be their undoing, for they cannot conceive the likes of the stranger they are helping on that snowy night.
No need to worry about the weirdo. He’s just passing through.

Psychological thriller books are always a great read, but there’s something special about them when set during a snowstorm. Something about the weather makes the suspense and tension even more palpable. And that’s precisely what you’ll find in Passing Through by R WK Clark. The story follows cabin owners Rick and Donna Welk as they encounter a dark and mysterious stranger during one of the worst blizzards the town has ever seen.

As the stranger begins to weave his way into their lives, the Welks realize that there’s more than one storm brewing in Thompson Trails. Psychological thrillers are the perfect blend of suspense, mystery, and horror, and Passing Through is sure to keep you on pins and needles from beginning to end. With its suspenseful plot and unforgettable characters, you’ll be glad you decided to curl up with this one on a cold winter night.

Get your copy of Passing Through today.

Thriller books can be a source of knowledge, comfort in dark times, or a window into new and different worlds. They can also be a source of suspense and mystery, as is the case with Passing Through by R WK Clark. When a deadly blizzard hits the small town of Thompson Trails, the residents are forced to take shelter in their homes. This psychological thriller is set during a snowstorm in a small town, the story follows cabin owners Rick and Donna Welk as they encounter a strange and puzzling outsider.

The Welks realize that there is more to him than meets the eye. There is a darkness lurking beneath the surface. They soon discover that the stranger has a hidden agenda. They must do everything they can to protect themselves from his threats. Passing Through will keep your heart racing with its suspenseful plot and unforgettable characters. So if you’re looking for a thriller that will grit your teeth, check out Passing Through. You won’t regret it. The quiet small town of Thompson Trails is the perfect setting for a psychological thriller.

It’s a place where everyone knows each other and secrets are hard to keep. The residents are forced to take shelter in their homes during a deadly blizzard. This provides the perfect opportunity for Elliot Keller to strike. Clark does an excellent job of bringing the town to life and creating a sense of suspense and mystery. If you’re looking for a thriller with an atmospheric setting, check out Passing Through. You won’t regret it.

The book follows the story of Elliot, a twisted and fascinating serial killer. R WK Clark is a brilliant writer who characterizes Elliot, provides insight into his warped mind, and makes him a believable and frightening antagonist. Readers will be horrified by his gruesome crimes and be drawn to his twisted charisma. This makes for a genuinely compelling read. If you’re looking for a thriller with a truly menacing villain, you won’t regret picking up Passing Through.

Alarming darkness lurks beneath the surface of Elliot Keller.

Rick and Donna Welk are the main characters in this psychological thriller. They relocate to the small town of Thompson Trails and set up a cabin resort for Appalachian Hikers. They soon encounter Elliot Keller, a strange outsider with a hidden agenda. As Rick tries to protect himself and Donna from Keller’s threats, the novel builds to an intense and suspenseful climax. With its well-drawn characters and a page-turning plot, Passing Through is a suspenseful novel that you won’t be able to put down.

Rick gets a weird vibe from Keller, and soon, he must do everything he can to protect himself and Donna from his threats. This makes for an intense and thrilling read. This suspenseful novel will keep your heart racing with its exciting plot. If you love psychological fiction books that will keep you on the edge of your seat, look no further than Passing Through by R WK Clark.

If you’re looking for a thriller with a heart-stopping ending, check out Passing Through.

In psychological thriller books, the antagonist is often the most interesting character. This is certainly the case in R WK Clark’s novel, where Elliot Keller is a mass murderer who kills anyone who crosses his path. His crimes are horrific and readers will be horrified by his gruesome actions. However, Clark does a superb job of making him a believable and compelling antagonist. By delving into his backstory and motivations, he humanizes him and makes him more than just a one-dimensional boogeyman. As a result, he becomes a truly chilling villain who lingers in the reader’s mind long after the book has been closed.

The novel starts with a bang, as convicted killer Elliot Keller escapes from prison and immediately resumes his killing spree. This sets the stage for an exciting and suspenseful story that will keep you guessing until the very end. With twists and turns at every corner, Passing Through is a thriller that you won’t be able to put down this psychological horror. So if you’re looking for a book that will keep you up all night, pick up a copy of Passing Through today. You won’t regret it.

Elliot Keller is a sociopath who gets a thrill from murdering and controlling people.

Sociopaths and psychopaths are characterized by their lack of empathy and disregard for human life. However, there are some critical differences between the two. Sociopaths typically have a history of victimization and emotional abuse. In contrast, psychopaths do not usually have a discernible motive for their crimes. One psychological thriller book that explores these differences is Passing Through by R WK Clark. The book follows the story of a sociopath who goes on a killing spree and the detectives who must race to catch him before he claims more victims. If you’re looking for a thriller with a genuinely psycho villain, Passing Through is definitely worth checking out.

The book follows Elliot Keller, a sociopath who enjoys murdering and controlling people. As the reader, you get insight into his warped mind and see how truly chilling he is. It’s a thrilling read that will make your blood boil. So if you’re looking for a new psychological thriller to dive into, be sure to pick up a copy of Passing Through. You won’t regret it.

What are Psychological thrillers?

Psychological thrillers are a genre of fiction that typically combines suspense, mystery, and horror. They are meant to thrill and excite the reader by exploring the human mind and its many dark secrets. Many psychological thrillers feature protagonists struggling with some sort of mental illness, which makes for a tense and unpredictable read. On the other hand, some feature insane antagonists committing heinous crimes. If you’re looking for a novel that will keep you on the edge of your seat, then a psychological thriller is a perfect choice.

What Makes a Good Psychological Thriller?

Many people might argue that the suspense and mystery make these books so thrilling to read. After all, who doesn’t love trying to figure out the puzzle before the protagonist does? But psychological thrillers are also known for their horror elements, making for an authentic spine-chilling experience. In the case of Elliot Keller in Passing through by R WK Clark, Keller is a narcissistic sociopath. He is not a character that is simply evil for the sake of being evil. Keller is a three-dimensional antagonist with believable motivations and fears. This makes the reader empathize with him, even as he commits heinous crimes.

Why these books are so thrilling to read?

So why are psychological thrillers so thrilling to read? It could be the suspense, the mystery, or the horror elements. But it’s also likely because these books offer a glimpse into the dark side of an individual’s personality. We all have secrets, fears, and motivations hidden from the world. And psychological thrillers offer a way to explore these aspects of ourselves in a safe and controlled setting. This is part of what makes them so addictive to read. We can’t help but want to know what happens next.

Keller has a need to control and dominate those around him. He is also plagued by fears of abandonment and a lack of self-esteem. These fears drive him to commit terrible crimes to prove his worth to the world. While Keller is undoubtedly a despicable character, R WK Clark makes him feel like a real person. This makes the reader feel all the more horrified by his actions. If you’re looking for a psychological thriller that will keep you on the edge of your seat, check out Passing Through.